THE ANNUAL GUIDE
TO INVESTMENT &
DEVELOPMENT IN KENT

The last 12 months has seen a mixed picture within the commercial property market on the back of an increase in inflation which reached 10.1% (September 2022) and with the threat of further increases in the short term.

Interest rates have reached 2.25% and are predicted to rise again soon. Energy prices and construction and transport costs have also risen, and trade is being held back by Brexit.
‍
There remains a shortage of labour in construction, which is a hangover from Brexit and the pandemic as some staff move to other sectors. All of this will have a great effect on UK trade, and consumer spending is being, and will continue to be hit badly. The threat of a recession is close by but was narrowly avoided this autumn. Notwithstanding this, unemployment is now only slightly behind pre-pandemic levels and although GDP has reduced significantly since 2020, recent figures have been better than expected. GDP was flat in the three months to July 2022, but monthly GDP grew 2.3% between July 2021 and July 2022. The new Conservative leader is certainly putting in measures which attempt to deal with the current economic situation.
‍
Akin to the rest of the country, Kent will have similar struggles although the county is very well placed to ride most storms due to its relative affordability in terms of commercial rents, land values and house prices. The county’s proximity and transport infrastructure for access to London, the M25 and consequently the rest of the UK and Europe, can only add to its USP compared with many other parts of the UK.

The Investment Property Forum (IPF) Survey of independent forecasts shows total returns declined in 2022 to 6.4% from 10.2 % earlier in the year. The projection for 2023 is notably weaker, falling to 3%, although we see this as a temporary dip, with forecasts showing an improvement to 5.8 % by 2024. Overall, industrial total returns combining rental and capital growth in 2022 showed 10.4% with only retail warehousing beating this figure, at 12.3%. Kent total returns within these sectors are similar. 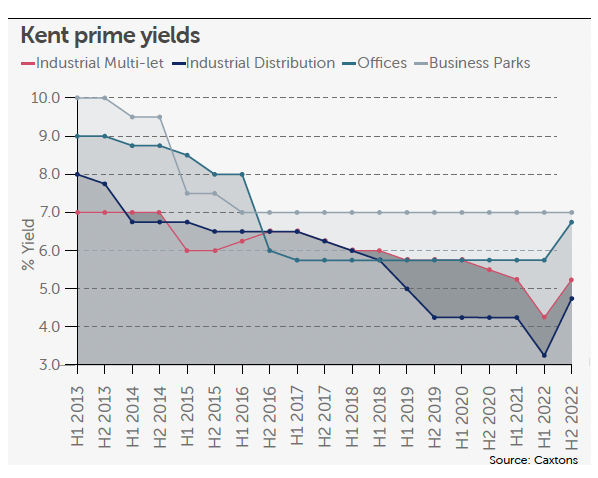 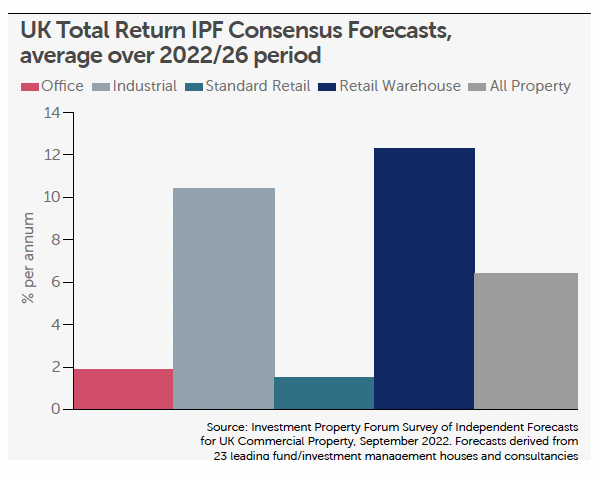 Prime yields for Kent industrial and distribution property, H2, 2022, the highest rate since 2016 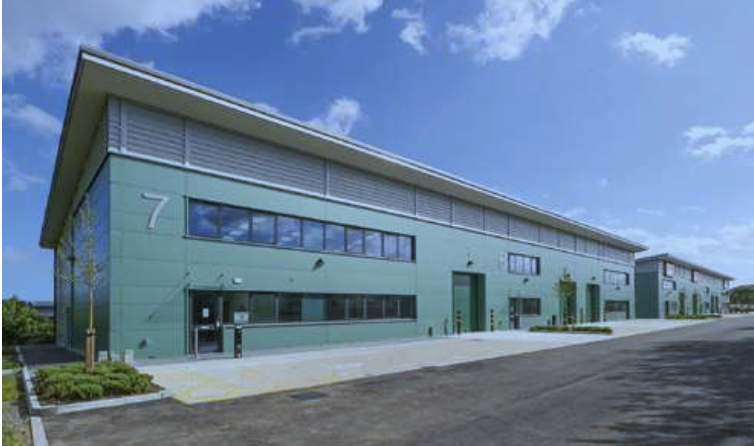 Science and business parks in Kent have continued to do well, particularly the former, which have been assisted by the growth of life sciences in the UK, and the fact that 18% of all office lettings in the UK in the first quarter of 2022 were to this sector. Kent Science Park and Discovery Park have experienced positive levels of lettings and renewals and have both developed new lab and start-up space, a scarcity in the South East. Traditional business parks have also secured lettings and in some cases rents have increased, or at least remained stable. Kings Hill for example achieved just under 24,000ft2 of transactions with four tenants.

The working from home/hybrid ethos has settled in post-pandemic and this has played to the strength of the flexible and co-working space market. New spaces have been set up across the county and these have proved popular. The supply of offices has reduced due to continuing conversion to residential, albeit the rate has slowed, and with little new space, and this has contributed to rents increasing overall by 7% over the year. The average rent now stands at £18ft2, but closer to London this has reached £30ft2 in places. With construction costs increasing, there has been more refurbishment. Kent is still seeing good investment yields. There were several deals at 8% to over 7% net initial yield compared to the average of 5.25% in the South East.

‍Occupier demand has continued to come from retail, parcel delivery and third-party logistics. Demand is such that, currently, Kent has less than a year’s supply of industrial space. Build costs have continued to increase due to supply problems, an increase in raw material prices, particularly steel, an increase in labour costs/shortage of labour and the war in Ukraine. Rental levels continue to increase from the heights of 2021, with Kent rents increasing by 8%, compared with 6% in the South East. Land prices have gone up by 40% in some areas. Kent has come a long way in terms of rental levels and land values, which may well continue for some time.
‍
The retail sector continues to struggle as internet sales remain high as a percentage of all sales, and consumer confidence has dropped. Average high street rents in Kent remain stable but the picture varies vastly from town to town, with some seeing rents increasing by up to 12% (Sevenoaks) and others seeing sizeable decreases. In terms of vacancies and lettings, fortunes also vary, but in most towns, coffee shops and hospitality, surprisingly perhaps, have taken over many units previously occupied by more traditional retail. Some shopping centres have benefitted from investment and improvements, two in particular – County Square, Ashford and Westwood Cross, Broadstairs – may soon see changes to incorporate more hospitality. Ashford Designer Outlet and Bluewater continue to see new lettings and expansions. Some supermarket chains remain in expansion mode, with new stores across the county, and retail warehouses continue to do well with reduced vacancy rates.
‍
As noted in the 2021 report, residential has continued to perform strongly. Analysis of Land Registry figures shows that house prices in Kent have increased on average by 23.5% across the last five years, compared to 19.5% in both the South East and England and Wales. Some districts in east Kent have seen far higher increases – up to 40%. New build prices have increased too, but in some areas, by surprisingly little. There is still substantial demand for housing, and housing land in many areas, and Kent continues to see large influxes of buyers from London, especially in north and west Kent. ‘Nutrient neutrality’ has caused a major slowdown in housebuilding in the Stour catchment area, but this is starting to be resolved, potentially freeing up many stalled sites. Demand for later living accommodation continues to increase but conversions from office to residential have slowed.

At the beginning of 2022, Kent’s M25 region yields in the industrial sector were reaching a high point achieving a whole point above the asking price in certain instances. This was in keeping with the South East in particular. However, this soon came to an abrupt halt in May when the US Federal Reserve increased their interest rates putting a temporary pause on acquisitions and the UK property investment market followed suit. Whether this will change towards the end of the year is yet to be seen, as many funds and institutions are under pressure to allocate funds before the year-end. Kent is slightly behind the South East curve for offices but returns are held up by science parks. Even better returns from out-of-town retail makes up for the relatively poor performance of the retail sector.

‍Moving forward we are in unknown territory in terms of both the commercial and residential property sectors due to the volatile, economic climate. However, Kent is arguably in a better position than other parts of the country both because of affordability and location within the UK and Europe. 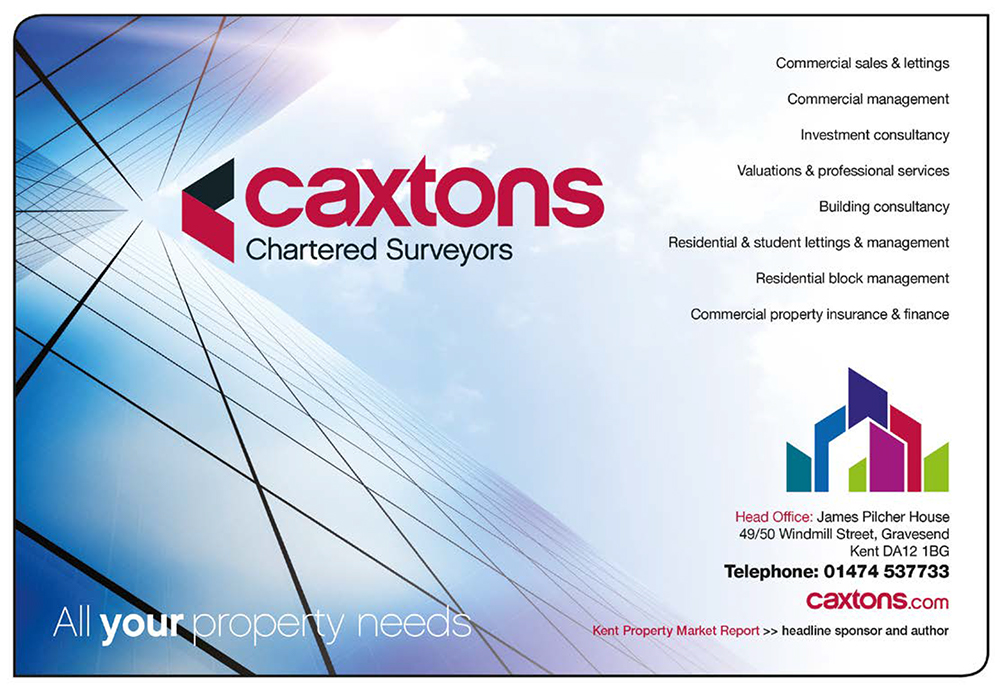