THE ANNUAL GUIDE
TO INVESTMENT &
DEVELOPMENT IN KENT

About Locate in Kent

As Kent’s inward investment agency, our aim is to encourage and support more businesses to set up and expand in Kent. We do this by providing information to help businesses and investors find the right locations, and connecting the right people with each other.

We’ve already helped thousands of companies realise their ambitions in Kent, so you can be assured of our support before, during and after you locate in the county. Rely on us to:

Looking to the future Locate in Kent has identified key opportunities for the region that will attract significant investment and create new jobs.

‍Many investments in Kent and Medway this year have reflected the region’s prime choice for logistics for nearly every industry.

The £205m Amazon facility at Dartford at 215,000m2 (2.3m ft2) reached practical completion this summer, just as construction began on the global online retailer's third facility in Ashford; thus catapulting Amazon as one of the region's largest employers with 2,000 staff.

Megger, the Dover based developer, manufacturer and distributor of electrical testing equipment completed its multi-million-pound investment in extending its manufacturing and head office facility.

Glencore, Cemex and Seacon invested in their facilities in Northfleet supporting the delivery of the Thames Vision, the development framework for more freight using the river instead of roads.

Cemex invested £30m in a state-of-the-art sea-going, suction hopper dredger in addition to their £4m investment in a new dry discharge system the year before. Seacon are investing in a programme of improvements including a jetty, new offices and warehouse buildings and acquisition of land next to Seacon’s original site. By removing old buildings, the company has created additional trailer space essential for its logistics contracts.

Three new hotels came on stream in 2021. Hampton by Hilton hotels in Canterbury and Ashford and a Travelodge in Sandwich, just in time for the 149th Open Golf Championship, creating new jobs and much need capacity for the visitor economy in the region’s most visited areas.

Plans to transform an unused 12ha (30acre) brownfield site into a thriving business park received consent in the summer and was put on the market by the promoters U+I shortly afterwards. The scheme addresses a shortfall of Grade A office and industrial space provision in the west of the region and is a much-needed catalyst for business growth. Well-connected and accessible by car, bus and train, the site has direct access to the newly improved A21 and is a short journey to the M25 providing a prime commercial development opportunity. 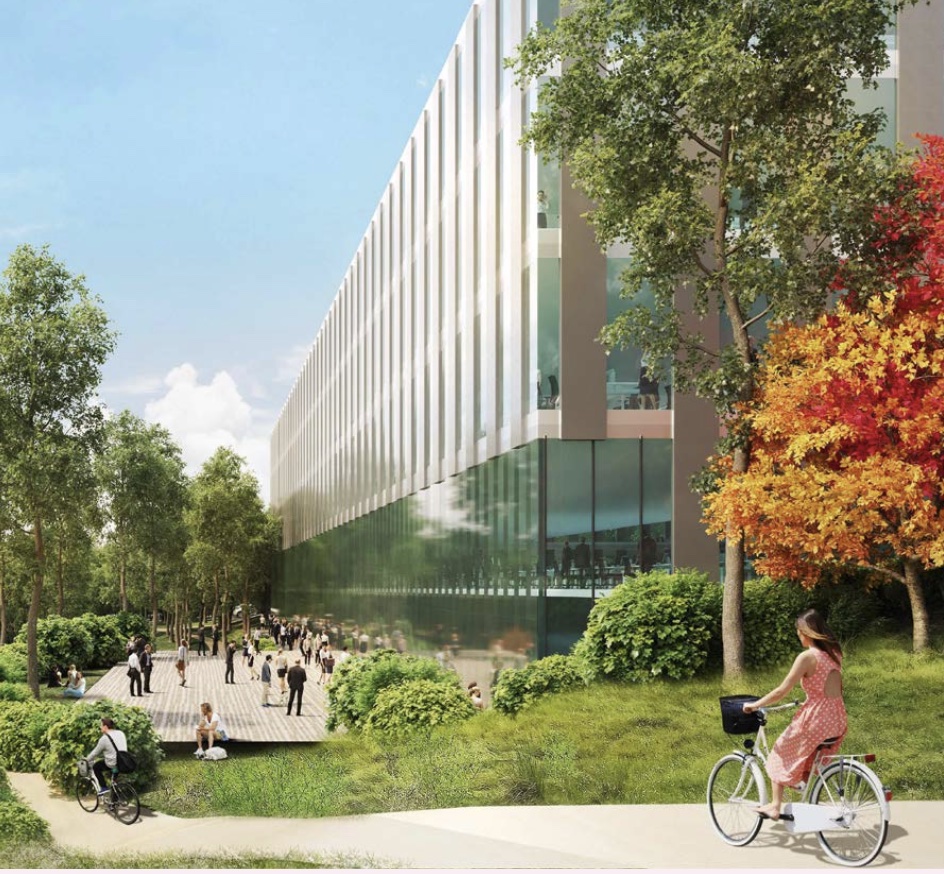 The 36.4ha (90acre) brownfield site has been vacant since 2015 when Aylesford Newsprint closed, ending a 90-year history of papermaking on the River Medway. Panattoni is the largest developer of logistics facilities in Europe. The redevelopment will give a new lease of life to this redundant brownfield site and create 3,000 jobs for the local area. The scheme is seven industrial buildings offering 177,000m2 (1.9m ft2) of new commercial floorspace with units to support the growth of local companies. When fully operational, the site will deliver more than £140m per annum of economic value to the Borough of Tonbridge & Malling and Kent as a whole, by attracting some of the world’s leading companies to the site. Construction began in 2021, with first occupation expected spring 2022 and completion by 2024. 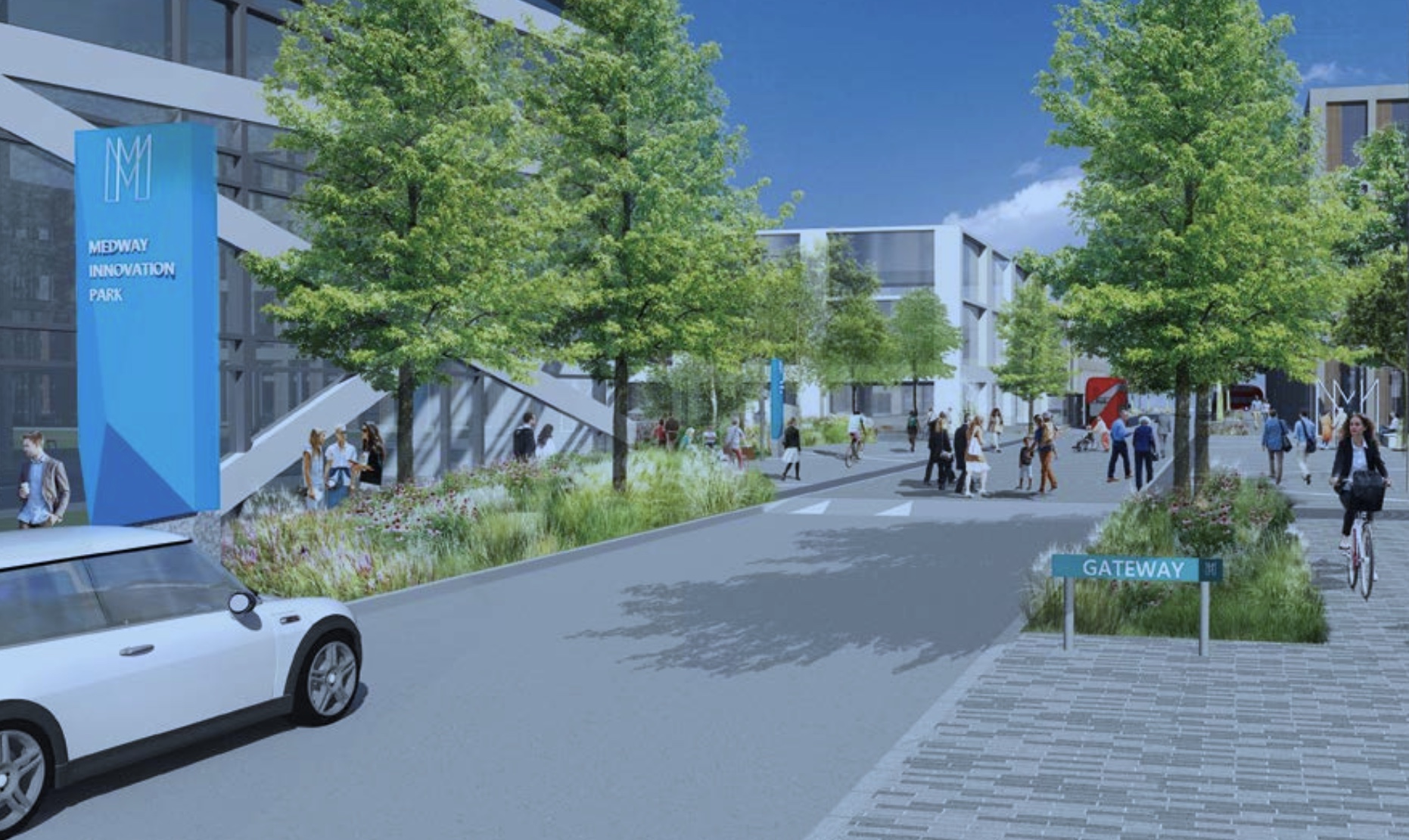 This is a new opportunity for high-value technology, engineering, manufacturing and knowledge-intensive businesses looking to grow in the South East. It will support the development of 101,000 m2 (1.09m ft2) of commercial space to provide indoor and outdoor informal meeting space and networking hubs that create an innovative community. Innovation Park Medway has excellent connectivity, strategically positioned with motorway access. The Park is one mile from the M2, three miles from the M20 and close to the High Speed One network.

The proposed regeneration and redevelopment of the former Kingsnorth power station site to create a modern new employment space on the Hoo Peninsula. Leading international energy company Uniper owns the site and is bringing forward redevelopment plans. With 330,000m2 (3.5m ft2) of employment space that could create around 2,000 to 2,500 permanent, full-time equivalent jobs once fully occupied. The scheme will offer a mixture of commercial, manufacturing and industrial uses, storage and distribution including data centre and energy uses.

The £47m mixed-used scheme located on the Ashford Road, Junction 8 of the M20, will deliver a range of modern, sustainable buildings in a landscaped setting with the potential to create up to 1,200 new jobs. The commercial units will have footprint sizes ranging from 440m2 (4,736ft2) to 4,950m2 (53,281ft2), targeting small to medium sized businesses. There will be extensive planting of native woodland, new ponds and the prominent use of local materials throughout the site.

In the planning pipeline

‍White Cliffs Business Park, Dover is undergoing an extension for the Inland Border Facility (IBF) and the Rapid Transit Route to facilitate Dover’s new Fastrack bus service. Kent County Council is managing both projects. A further 27ha (66acres) for employment uses is being promoted for the Local Plan Review as well as an area known as The Triangle containing two smaller sites of 4.2ha (10.5acres) and 6.8ha (17 acres).  Otterpool Park is the proposed Garden Town located close to Hythe with excellent connectivity to London and Europe by road and rail. Outline planning permission has been submitted for this residential-led mixed-use development comprising up to 8,500 homes alongside schools, health facilities, retail, leisure and commercial uses as well as open space and public realm.

Manston Airport
‍
‍The plans for Manston Airport provide air freight operators with a realistic alternative to London airports, easing road congestion caused by freight lorries and boosting economic growth and jobs in Kent. The proposals could create thousands of jobs across East Kent and the wider national economy by the airport’s 20th year of operation.

London Resort
‍
London Resort Company Holdings is proposing to develop a world-class, sustainable, next generation entertainment resort known as ‘London Resort’, set over 465ha (1,150acres) on Swanscombe Peninsula. The first theme park ‘gate’ will open in 2024 and the second by 2029. The project promises thousands of direct and indirect jobs in the construction phase and operation of the resort.

Ebbsfleet Garden City
‍
‍It will attract 36,000 new residents in up to 15,000 new homes and up to 30,000 new jobs. It is sandwiched between the River Thames and the North Kent greenbelt ‘where London meets the Garden of England’ on the High Speed One train line. The development is focussed around four strategic sites; Ebbsfleet Central (to include Ebbsfleet International Station, 4,000 homes and a health employment focus); Eastern Quarry (over 6,000 new homes across two new villages); Northfleet Riverside (to re-open public access to the Thames and include a new linear park) and Swanscombe Peninsular.